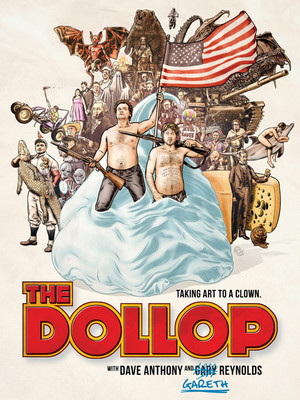 The bits of history you didn't learn in class

Why See The Dollop?

Every couple of weeks, Gareth Reynolds and Dave Anthony explore an historical titbit on their podcast The Dollop. They're not interested in history's grand sweeping narratives, rather those stories which you'll struggle to believe are true, featuring some of the greatest weirdos, charlatans and bad-asses that the world has ever seen. Past subjects they've tackled include The Battle of Hayes Pond, which pitted the Lumbee Tribe against the Ku Klux Klan, and the life and times of 'monkey whisperer' R. L. Garner. If these guys had been your teachers in school, history class may not have been such a snooze!

Gareth Reynolds and Dave Anthony occasionally take their show on the road, and you can catch a live recording of The Dollop when they appear live near you!

Seen The Dollop? Loved it? Hated it?

Sound good to you? Share this page on social media and let your friends know about The Dollop at The Pageant.