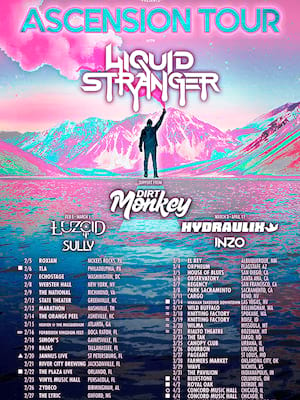 One artist who everyone seems to agree is a premier contributor and creator of bass is Liquid Stranger, the Swedish-born father of all that is weird and wonderful.

When his childhood roots in classical music met his interest in Atari games and computer software, Swedish-born producer Martin Staaf began his experimentations with multiple genres and EDM, culminating the in the release of his debut album The Invisible Conquest under the name Liquid Stranger in 2007. Thirteen years and thirteen albums later, Staaf is gearing up to hit the road on his 2020 Ascension tour!

A pioneer of 'Transitional Dubstep', Staaf is inspired by and uses sounds from Latin, Asian, Jamaican Dancehall and Eastern European dubs, as well as Ambience, Big Band Swing and Psychedelia, merging genres to create his own unique style. When it comes to his live shows, expect bone-shaking bass lines, retina-searing light shows and euphoric drops.

Sound good to you? Share this page on social media and let your friends know about Liquid Stranger at The Pageant.