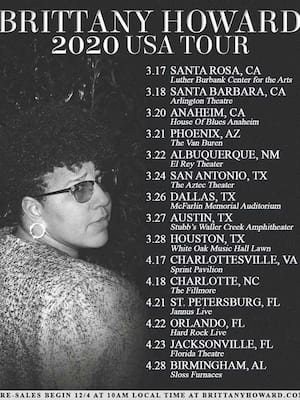 As the frontwoman and guitarist for Alabama Shakes, Howard has become one of music's most celebrated figures.

Brittany Howard is known for being the sensational and powerful voice, frontwoman and guitarist for Alabama Shakes but now is heading solo. The blues-rock band that formed 10 years ago in Alabama have only released two albums in their time but have received a whopping four Grammy Awards and been nominated for nine. Howard is ready to hit the road alone with her debut solo record Jaime.

The artist released her solo debut 'Jaime' on 20th September and named it after her late sister. Pitchfork labelled the offering as "a thrilling opus that pushes the boundaries of voice, sound, and soul to new extremes." The album has also been described as being "packed with urgent, impassioned pleas to love" and "stories that will make you check your privilege" by NME and a "personal, political soul exploration" by Rolling Stone.

It's too bad that Brittany's amazing voice was overwhelmed by truly terrible... more

Sound good to you? Share this page on social media and let your friends know about Brittany Howard at The Pageant.