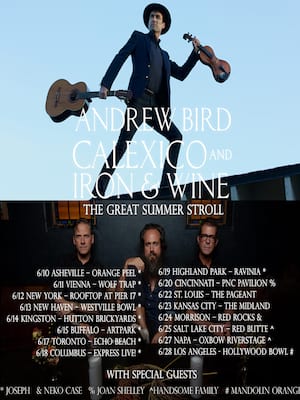 Andrew Bird with Calexico and Iron and Wine

God Is In The TV

Why See Andrew Bird with Calexico and Iron and Wine?

Collaborative supergroup Calexico and Iron and Wine have announced a joint US tour with fellow indie-folk giant Andrew Bird. Taking place throughout June off the back of each act's respective new album in 2019, the trek will include huge shows at Red Rocks Ampitheater, Hollywood Bowl and Echo Beach in Toronto.

Andrew Bird's latest effort My Finest Work Yet is his 15th studio album. Released in March 2019, it blends his dark lyrical humour with piano-led soul-tinged songwriting, fused with the blissful violin-based moments fans have come to expect of Bird's output.

Both mainstays of the early '00s indie scene, Calexico and Iron & Wine have elevated themselves to some of the genre's most respected and inspiring inclusions. With a willingness to experiment, be it with latin, country, jazz or rock (among many others), they've gained long-lasting success as consummate performers and musicians both individually and, since their joint EP In The Reins in 2005 and 2019's joint LP Years To Burn, as one collaborative group in their own right.

Seen Andrew Bird with Calexico and Iron and Wine? Loved it? Hated it?

Sound good to you? Share this page on social media and let your friends know about Andrew Bird with Calexico and Iron and Wine at The Pageant.