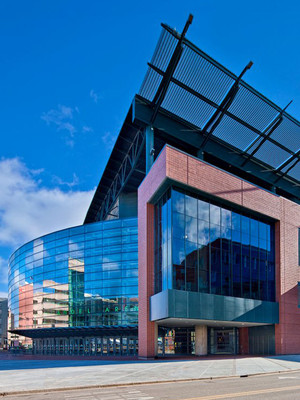 If you're happy to travel

Do you remember the first time you ever saw a dinosaur..?

Roam With The Dinosaurs in Jurassic World Live

Because humanity just hasn't seem to learn from the poignant lessons of all five of the Jurassic Park films, the delightfully terrifying dinosaurs of the ever popular franchise come roaring to life during the hotly anticipated Jurassic Park Live Tour this fall! Don't worry though, real life scientists haven't quite made the breakthroughs their feature film counterparts did, the terrible lizards on this special arena tour are fully animatronic yet fully life-sized replicas that extend up to forty feet in length.

A chance to roam where the dinosaurs do, the show transports its audiences to the fabled jungle island of Isla Nublar with state-of-the-art projection displays, telling a brand new story inspired by the rebooted Jurassic World blockbusters as told through the interactions and relationships between dinosaurs and humans. Alongside a herd of robotic dinos and human-operated contraptions and characters, dazzling live stunts and 3D technology break the barriers between performer and audience, making for a deeply immersive show that your inner childhood palaeontologist can't wait to sink their teeth into.

One hour and 50 minutes with intermission

I took my 6 year old to the show as he has always been a dinosaur lover... more

This show was fantastic. It was very thrilling. Cast and costumes were... more

Sound good to you? Share this page on social media and let your friends know about Jurassic World Live at Enterprise Center.