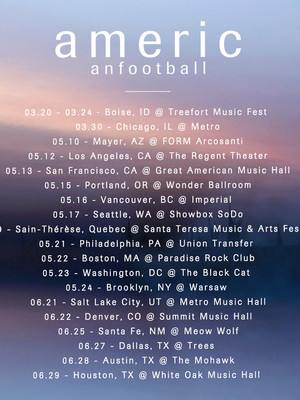 Indie Rock outfit American Football head out on tour this summer as they present their brand new, and third self-titled album. Having previously disbanded in 2000 the four-piece reunited in 2014, and haven't looked back since!

This third album sees the band come into their own. Discarding their previous chaotic sound, the group focus on cleaner, more intuitive tracks, taking them back to their roots of confessional lyrics and gentle rock. A mix of their signature 'emo' sound and dream pop, American Football can boast of a more grown-up sound, as the band steps into their prime.

Please note that some venues are age restricted, please check with the venue before purchasing tickets.

Sound good to you? Share this page on social media and let your friends know about American Football at Delmar Hall.